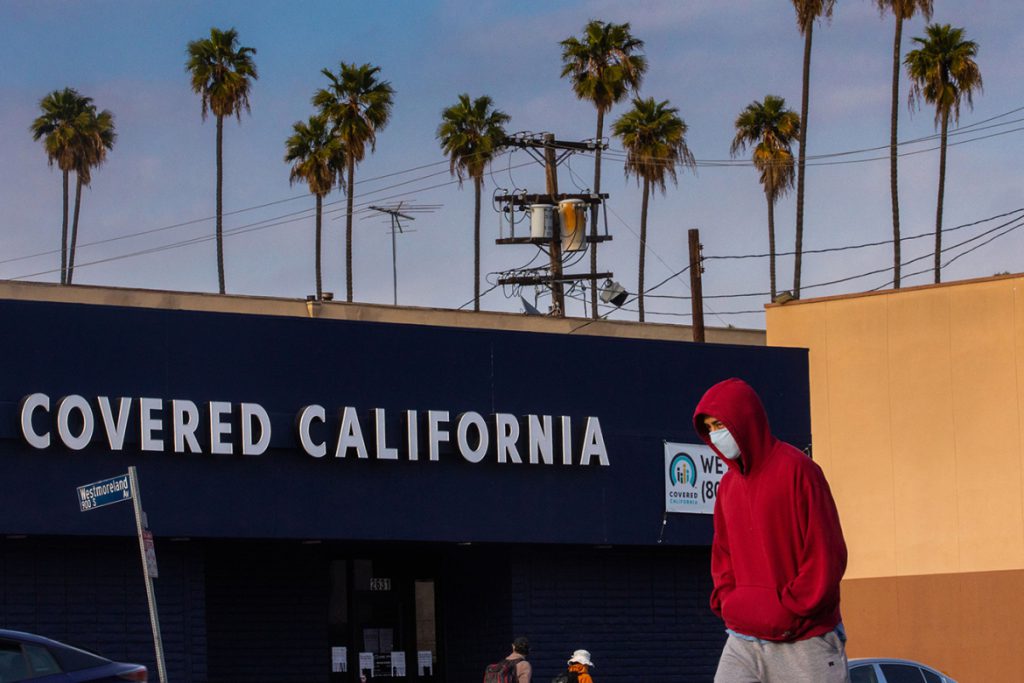 Early estimates, including a scary one from Covered California issued in late March, warned that costs associated with COVID-19 could drive health insurance premiums up 40% next year without federal help, based on initial models of the number of Americans who might fall seriously ill. That report, though, did not take into account the effect of the sharp decline in elective care. (Apu Gomes/AFP via Getty Images)

As doctors and consumers are forced to put most nonemergency procedures on hold, many health insurers foresee strong profits.

So why is the industry looking to Congress for help?

Insurers say that while that falloff in claims for non-COVID care is offsetting for now many insurers’ costs associated with the pandemic, the future is far more fraught.

Costs could remain modest or quickly outstrip savings. A recession could drive revenue down. Or the coronavirus could resurge next winter and spike treatment expenses.

All that uncertainty for the companies could trigger far higher premiums for consumers, if insurers hedge their bets. Then again, the current savings insurers are seeing — along with cautions from state regulators about pushing cost-sensitive customers away during an economic downturn — might result in minimal premium increases.

“Insurers are nervous, to be sure,” said Mike Kreidler, Washington state’s insurance commissioner. “But so far they are telling me they are in good shape. Coronavirus claims have not been that high — yet.”

Backing that assessment was a report out last week by credit rating agency Moody’s, which looked at a range of pandemic scenarios — from mild to severe — and concluded “U.S. health insurers will nonetheless remain profitable under the most likely scenarios.”

Earlier this month, UnitedHealth Group CEO David Wichmann told analysts that cost reductions so far are outstripping expenses for COVID-19 and that revenue is up compared with the previous year. He expects — barring a worsening situation — the rest of the year’s earnings to match projections. Other insurers, including Centene, Anthem, Humana and Cigna, are scheduled to release earnings reports this week.

If these results are repeated across the insurance industry, there will be pressure on insurers to hold down rate increases for next year and do more for policyholders, such as constrain the growth in deductibles and other out-of-pocket costs, said consumer advocates, regulators and policy experts.

“The last thing we need is insurers pricing their coverage unnecessarily high at a time like this,” said Peter Lee, executive director of Covered California, the health insurance marketplace in that state for people who buy their own coverage because they don’t get it through their job.

That prediction comes as tens of millions of Americans have lost their jobs — and often their health insurance.

Those thrown out of work may be able to stay on employer coverage through a federal law called COBRA, but it’s expensive and workers have to foot the bill. Insurers and employers have asked Congress for relief legislation to fully cover COBRA costs.

Losing a job is also a qualifying event to enroll in an Affordable Care Act plan — and, again, the industry has asked lawmakers to temporarily boost subsidies to help enrollees pay their premiums. Some states that run their own ACA marketplaces have reopened enrollment to help the uninsured get coverage.

The industry also wants Congress to authorize temporary financial support to help cover insurers that face “extraordinary, unplanned costs in 2020 and 2021,” according to a letter sent to lawmakers from America’s Health Insurance Plans and the Blue Cross Blue Shield Association.

To help, some states are giving insurers more time this year to submit their planned premium rates for 2021 — based on their expected costs — hoping things may be clearer by summer. California, for instance, is giving insurers until July to draw up their estimates.

One fear is that insurance actuaries, when faced with an unknown risk like the coronavirus, will price higher than needed, said Lee.

Setting premiums for next year is a balancing act. Insurers that calculate incorrectly and go too low will lose profits and may have to dig into their cash reserves to pay claims. If they set rates too high, they may run afoul of a provision in the ACA that requires insurers to issue rebates to policyholders if they don’t spend at least 80% of revenue on medical care.

And they don’t estimate well even in normal years. Early data for 2019 coverage shows insurers may owe a record amount in rebates, which will be paid out this year.

Insurers are not talking about next year’s premiums.

“We do not yet know the full scope, severity or duration of this outbreak. So we cannot know the ultimate cost of our members’ medical treatment or how long the postponement of non-urgent care will continue,” said Justine Handelman, senior vice president at the Blue Cross Blue Shield Association.

Early estimates, including a scary one from Covered California issued in late March, warned that costs associated with the coronavirus could drive premiums up 40% next year without federal help, based on initial models of the number of Americans who might fall seriously ill.

That report, though, did not take into account the effect of the sharp decline in elective care.

Thirty-one states have barred most elective surgeries, part of the effort by governors to promote social distancing to flatten the curve of the epidemic and to help prevent hospitals from being overwhelmed.

“The good news since we published that report is that it looks like efforts to flatten the curve are taking effect,” said Lee, so costs are more likely to be in the median rather than high end of the range.

The cost to insurers “all depends on the severity” of the continuing pandemic, said Dean Ungar, a vice president and senior credit officer at Moody’s. “On the lower side, the industry will do quite well, and also even in a more median scenario, especially when you factor in the offsetting benefit of delayed procedures.”

Even so, “I don’t think the insurance industry as a whole has any intention of making money off this,” Ungar said. “There will be rebates or other things to help. Partly that’s the right thing to do and partly it’s good business.”

Former Cigna executive turned industry critic Wendell Potter disagreed. He tweeted earlier this month that UnitedHealth spent $1.7 billion during the first quarter to buy back its own stock — a move that helps the company. “In other words, they’re thriving during a pandemic,” Potter tweeted. Instead, he said, the insurer should plow that money into premium reductions or other help for policyholders.

For its part, UnitedHealth said it has waived patient cost sharing for COVID care — as have most other insurers — as well as accelerated payments for what it owes to doctors, and is helping provide loans to some clinics.

Some physician groups fear they are being left out, saying some of the savings seen by insurers and self-insured employers should be directed to those struggling after seeing their practices dry up as people avoid medical care or governors bar elective procedures.

“A bad outcome of all this will be if thousands of providers can’t make it financially and their practices get bought up by hospitals or private entities — creating more consolidation in health care, which is already driving costs up,” said Lee. “Lawmakers should be thinking about helping primary providers out.”