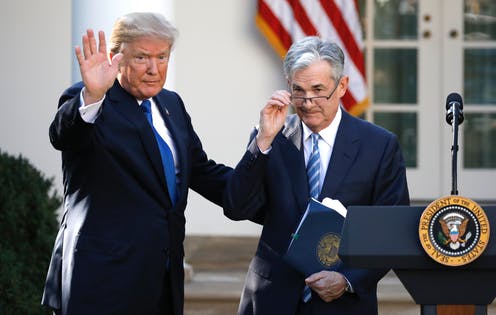 Should you care if the Federal Reserve loses its independence?

It’s become a growing risk in recent years as President Donald Trump has repeatedly attacked the U.S. central bank over interest rate policy and tried to appoint his political allies to its board. Most recently, he reportedly has explored removing Fed Chair Jerome Powell, whom Trump named to the post only last year.

I have been steeped in economic and monetary policy for decades, including stints at the Fed and the Bank of England. To answer my initial question, yes, you should care a great deal if the Fed were to become less independent. Here’s why.

The Fed has a mandate from Congress to “promote effectively the goals of maximum employment, stable prices and moderate long-term interest rates.”

It tries to meet these goals primarily through its ability to set benchmark interest rates, which requires careful balancing the economy’s many different needs.

For example, a central bank may decide to lift interest rates to lower inflation or cool down an overheating economy. But this can be painful for some, such as borrowers who will have to pay more to invest or buy a home – or presidents facing reelection, who don’t want anything slowing down the economy. At other times, the Fed may need to cut rates to give the economy a boost, but this hurts savers and those who depend on a fixed income, such as retirees.

The Fed’s independence from meddling ensures it can make politically difficult decisions that are in the long-term interests of the overall economy – not merely what a particular politician might like.

Research has consistently shown that economies do in fact perform better when their central banks are more independent.

One measure of this is inflation, or the rate that prices rise over time. Economies that are poorly managed tend to have higher inflation or even hyperinflation, because it erodes the real value of a currency and can lead to destabilization. A 2016 study found a strong correlation between countries with low inflation and more independent central banks.

Putting the economy at risk

Presidents trying to get the Fed to do their bidding is hardly a new thing.

The most famous case is Richard Nixon’s successful effort to get the Fed chairman at the time to cut a key interest rate to stimulate the economy ahead of his reelection bid in 1972. This contributed to the high inflation of the 1970s, which required double-digit interest rates to tame.

In other words, politicization of the Fed puts the entire U.S. economy at risk. So far, it seems Chair Powell has ignored Trump’s calls for monetary stimulus and insists he will serve out his full four-year term.

All Americans should hope Powell stays in his post and continues to try to do what’s best for the economy, not just the president.